I have been a keen reader of Private Eye since I was a bairn. I guess reading it for a long time before I really understood it all is one of the reasons why I became such a political animal.

One of the things reading the Eye for all these years taught me is firstly that they can get sued a lot for posting the “close to the knuckle” stuff that they do, there were quite a few apologies and retractions! Much more significantly to me was the number of stories they carried, about corruption lies and the abuse of power, that I never saw published elsewhere.

I would later learn that the reason for this was that even though the mainstream media knew these stories to be true fear of libel action and litigation deterred them from publishing. This was probably the first time I had any idea of the power of British Libel laws to stifle legitimate debate and comment. 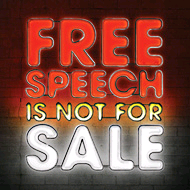 Recently there have been a number of cause célèbre, around issues of libel law. Simon Singh’s being sued by the British Chiropractic Association was the biggest headline case which led to fears that legitimate comment on scientific matters would be stifled. Although Simon was successful the chilling effect is continuing with Dr Peter Wilmhurst still being sued over comments he made in a scientific capacity on a medical trial.

Also we have had massive twitter storms around the “Trafigura” scandal which introduced many people to the notion of “super injunctions” which not only prevent the press from reporting on a story, but also from even reporting that they are barred from reporting on something. It is Kafkaesque nonsense and it is a real strike at democracy and free speech.

Therefore I am proud to support Libel Reform Campaign, and join in with the Mass Libel Reform Blog. I hope my readers can support the campaign.

This week is the first anniversary of the report Free Speech is Not for Sale, which highlighted the oppressive nature of English libel law. In short, the law is extremely hostile to writers, while being unreasonably friendly towards powerful corporations and individuals who want to silence critics.

The English libel law is particularly dangerous for bloggers, who are generally not backed by publishers, and who can end up being sued in London regardless of where the blog was posted. The internet allows bloggers to reach a global audience, but it also allows the High Court in London to have a global reach.

You can read more about the peculiar and grossly unfair nature of English libel law at the website of the Libel Reform Campaign. You will see that the campaign is not calling for the removal of libel law, but for a libel law that is fair and which would allow writers a reasonable opportunity to express their opinion and then defend it.

The good news is that the British Government has made a commitment to draft a bill that will reform libel, but it is essential that bloggers and their readers send a strong signal to politicians so that they follow through on this promise. You can do this by joining me and over 50,000 others who have signed the libel reform petition at

Remember, you can sign the petition whatever your nationality and wherever you live. Indeed, signatories from overseas remind British politicians that the English libel law is out of step with the rest of the free world.

If you have already signed the petition, then please encourage friends, family and colleagues to sign up. Moreover, if you have your own blog, you can join hundreds of other bloggers by posting this blog on your own site. There is a real chance that bloggers could help change the most censorious libel law in the democratic world.

We must speak out to defend free speech. Please sign the petition for libel reform at

I shall do a couple of updates with links to as many of the mass blogs as possible. Here is what I have discovered so far:-

Further Thoughts for the Day

The Mind of Arc