It is never good when a phone conversation starts with “I’m afraid I have got some bad news”. I was walking around
BHS When I got the call from my friend John.

He told me that Rick had died in the night. I wondered who he meant, mentally checking off people called that…. “I mean Recardo…..”

I don’t really remember anything else about that conversation, I just sat down on one of the display pedastals for about 20 minutes.

Rik can’t be dead, he is too young, too healthy, too full of life, I thought, this must be a mistake, John must have got it wrong. I tried to ignore the horrible feeling in my stomach.  When John called back a bit later I was just hoping he was calling to tell me it was a mistake…. even though I knew really that wasn’t going to happen. 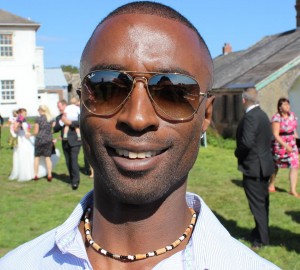 I’ve been numb for days. I can’t process this awful news. I just need to write about my friend, who I love, and who I now have to say good bye to.

I met Rik around the turn of the Millennium when he first started working at the Seymour Arms. I liked him instantly. He was a bit nervous at first behind the bar, and even though I was getting the same order all night I don’t think I paid the same price once. Something I’d later learn was “Classic Rik”. I didn’t matter though he was cool, and fun, and nice.

We became really close friends a couple of years later when we decided to form a new Sunday league football team out of the Seymour, called, at the time “Greenbank Wanderers” as the old Seymour team had disbanded owing the local league a load of money…. I’m not sure our terrible subterfuge actually fooled the league but Rik, with his customary charm, sweet talked the league into letting us in.

The years spent working so closely with Rik to (very badly) run the football team were great. I got to know a wonderful person. He was warm, funny, with a really big heart. He had a laugh that seemed out of place on such a small man, and he used it liberally. It was always really hard not be smiling whenever you were in Rik’s company. He always made me, and anyone he was around feel good.

And the thing with Rik is he was just so nice. Everyone I ever knew who had met him, and from reading the Facebook tributes hundreds of people I didn’t know too, just felt instantly that he was nice. One of the nicest people you could ever meet is one of the trite, clichéd sayings. But in Rik’s case it was true.

Rik was so decent, so optimistic. Even when stuff was tough for him he approached things with a smile. He did tough jobs, working with people who needed help and Rik always saw this as a mission, even when it was frustrating to him he did these things and did them well. He would never put it like this because it wasn’t the way he spoke, but he tried hard, all the time I knew him, to in some way make the world a better place, and to help others. I can’t really guess how many lives he touched, and made better, over the course of his life. So many though.

When I phoned Rik when I was down about something he always had an amazing ability to make me feel better, often after just seconds of talking. He exuded good vibes, put people at ease. I was always amazed at Rik’s ability to make so many friends, so often.

The truth is Rik was in many ways the kind of bloke I wish I was, the kind I try to pretend to be in public. But for Rik this all came natural, he wasn’t trying or pretending…. It was just him.

Not to say Rik was perfect, everyone is flawed. Time keeping, concentrating,  organisation, the truth is we are not going to remember Rik for excelling in these areas. But Rik even managed to somehow make his flaws endearing. The amount of time I have spent waiting at tube stations, in bars, at restaurants for Rik’s to arrive at, tapping my watch or phone in frustration. I could never stay mad at him when he did arrive though.

I fondly remember a match when we were all sat around wondering where the bleeding heck the opposition were. I remember grilling Rik half a dozen times about where we were playing. Rik was adamant the match was taking place at Staddi. Eventually the manager of the other team showed up, I asked Rik one last time if we were in the right place as I got ready to have a pop at the other manager. He piped up with “Didn’t you get the new fixture list sent out last week?”

Twenty heads all turned to look at Rik but we all knew the answer, as Rik sheepishly admitted he hadn’t checked it and missed the change of venue!

Rik, the contradictory guy who could hit a sublime cover drive for four off a decent ball, then later that over absently wonder up the wicket and get stumped.

I still, to this day, whenever watching football and someone skies a shot miles over from a few yards our scream “Ricky”…. That is going to hurt next time it happens….

I can’t believe I’m never going to get to see Rik as a doting father, and that the first time I meet Eva will be when I say goodbye to Rik. Gutted that I’m not going to get to gently josh him as he bursts with pride and enthusiasm about the stuff his kids have got up too.

How will this kind, and wonderful, and gentle man not get a chance to be the amazing, perfect, dad I know he would have been? Rik was made for this, it is so cruel that it cannot happen.

Every time I think about what has been taken away from Rik, and particularly from Rachel and Eva. Everything he could have done. I get so angry, so upset, so bitter. It isn’t fair.

But then the same voice keeps popping up in my head, Rik’s, and I realise that reacting like this isn’t right. Rik would not have been bitter, or morose, or wallowing in self pity. He wasn’t like that at all. I keep thinking that however hard, I am not doing his memory right by allowing that to be how I’m thinking.

So I want to think positively about him, about my friend, and remember him right. It’s hard when you are so full of loss and grief.

I want to look back at more smiles, and more laughs, and more good times than anyone could reasonably expect in a 16 year friendship. Even if it still isn’t enough…..

I want to think about the wonderful, inspirational, decent, brilliant man who bought me, and everyone else, nothing but joy in our lives.

I want to think that Rik is always going to be with me, that he hasn’t, and won’t ever, really go away as long as I remember him this way.

I want to say

“Recardo Cassius McDowell I will always love you, you are one of the best friends I could ever hope to have had. I’m going to miss you for the rest of my life. Thanks for every minute of your life that you shared with me.”

Goodbye Rik, you are amazing.