I like to follow a number of food blogs, most of which are far more accomplished than the food stuff in these pages. I recently found a particularly good one called Frugal Feeding. One particular recipe really caught my eye, for Mango Chutney with a hint of kick. I saw this and felt compelled to try it ASAP and I was not disappointed. It is great and easy enough to do and in line with the MO for his blog cheap in all! I do suggest folks try that one as well.

Having made a chutney that was a grand success and pretty straightforward to accomplish my interest was piqued and I decided I wanted to try some others. Starting with this Indian Chutney, or as my little brother and I called it as children “Grandma’s horrible jam”!* Now I’m a pretty confident cook, and I love to experiment, but taking on a beloved family recipe is a little daunting. It is probably fair to say that the lion’s share of Clan Ferrett consider this chutney to be the nicest one made by man or beast so it was a lot to live up to.

Luckily for my it turned out pretty well and I ended up being very, very pleased. It obviously wasn’t quite as good as when my Grandma makes it but I guess in these situations that is rather par for the course.

First off in a large pan boil the apple in the vingar until it has started to turn into a pulp like substance (top tip do not taste this, cooking apples and malt vinegar are not nice. I have taken this bullet for you, thank me in your own time!) This will probably take about 15 minutes or so. 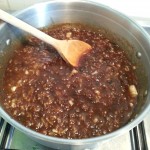 Next add all the other ingredients into the pan and simmer until it has reached the desired consistency. Now you want it to get pretty gloopy to be honest. But remember the chutney will harden once it has cooled down so you want to simmer it down until the consistency is just a little bit more liquidic than you would want your chutney to be.  Mine looked a little like this when it was ready to jar up.

Based on my experience I think it is probably well worth getting a jam funnel off someone (you can buy them in Wilkinsons for 3 quid) as getting quite hot chutney into jars without making an almighty mess is a pain in the proverbial. On jars if like me you have a go at this and get the chutney bug it can be quite tricky to obtain them if you suddenly want to make enough chutney and pickle to feed an army. My second “top tip” is that Tesco and Sainsburys both sell that super cheap own brand Lemon Curd for 17p a jar. And whilst it is wasteful to just throw stuff away much cheaper than buying empty jars if you cannot rustle up enough from your friends and family.

Anyhow I hope you folks who read Lunchtime Legend like Chutney because I have the bug and I suspect my next few posts will all be of a similar ilk!

* Although we called it Grandma’s horrible jam we still loved it! I think the name came from the fact that it looks to the uninitiated like very sweet jam but obviously doesn’t taste that way being a little more spicy. Anyhow the name stuck and is something of a family joke now!