I see myself as being a pretty impressionistic cook, like Captain Barbossa on the Pirate Code I see recipes as “more what you’d call “guidelines” than actual rules”. So I like to experiment a bit. Now after making two chutneys that involved sticking to others recipes I really wanted to fly by the seat of my pants a little and make one up.

Now obviously all cooking is a little bit about standing on the shoulders of others (would be ludicrous to just randomly experiment with ingredients I guess) so those of you who have read my last recipe for Indian Chutney, and the Frugal Feeding recipe that kicked off this current fad will be able to see a clear genealogy from those two recipes too this one.

I decided that Pinapple and Ginger would be my starting point, and I wanted it to taste a bit like Caribbean food so the main spice would be allspice. Like the Mango chutney I wanted it to have a hint of kick so some fresh chillies (which I also hoped would be aesthetically pleasing in the jar.) 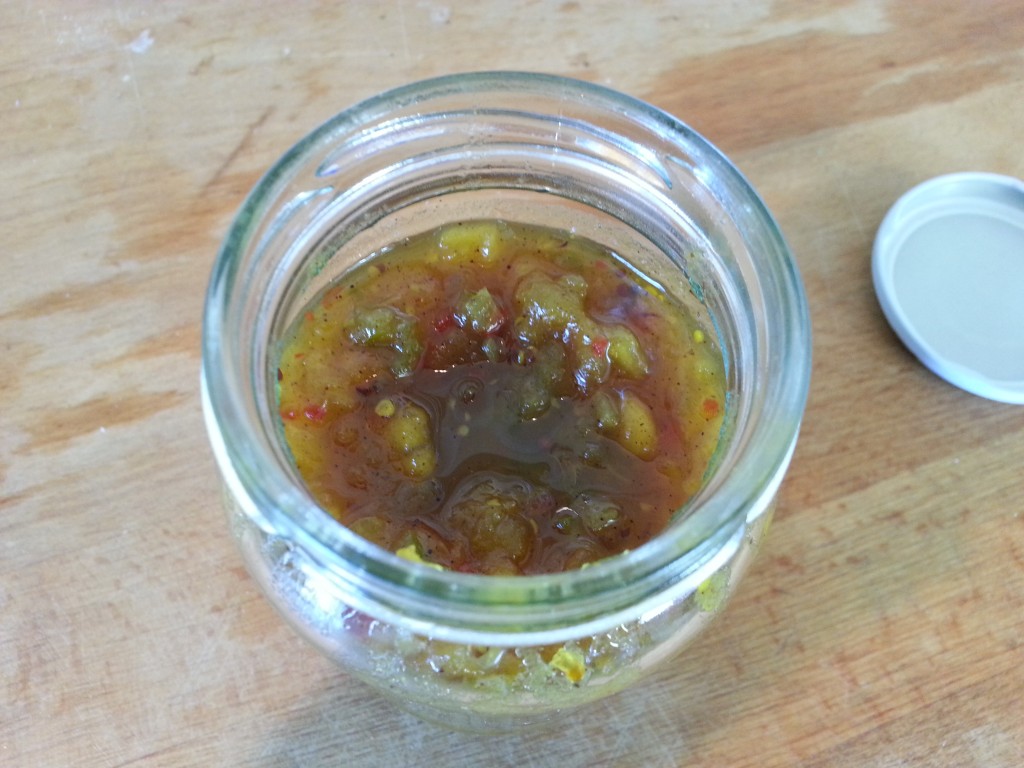 Maybe not the best angle!

Right first up boil the apple and vinegar together in a large pan until it is starting to go a little pulpy. Then add everything except the sugar and pineapple and boil for another 10 minutes or so. Next add the sugar and pineapple and boil until sugar desolved. Reduce to a simmer and cook until it reaches the desired consistency (a little bit more runny that you would like it in the jar) this took about 40-45 minutes for me.

At first I didn’t think it had been a roaring success, but I think with these spicy chutneys you really need to have given it time to cool down and mature a bit. Just tasted some a minute ago and it is much nicer. I think it would be pretty cool doing it with actual allspice berries but not been able to source them in Plymouth at the moment so I just used the dried spice.

I suspect the recipe needs a little tinkering but I am more than happy with my first effort at making up a chutney recipe. Next up is going to be my take on a classic, red onion chutney!