Laksa is a Malaysian dish. I had never really eaten it before this summer when I read an article by Nigel Slater in the Guardian about spicy summer soups. I was instantly sold, but for my money as well as being good when warm it is a great way to heat yourself up with a fiery curry in the winter.

Had this a couple of times over the last two weeks and this is my more recent go. It is a pretty versatile dish and I reckon you could put pretty much anything in it and it would be good. The other one I did recently was with king prawns, roasted butternut squash and sliced yellow peppers. This veggie one was designed to be a bit healthier. 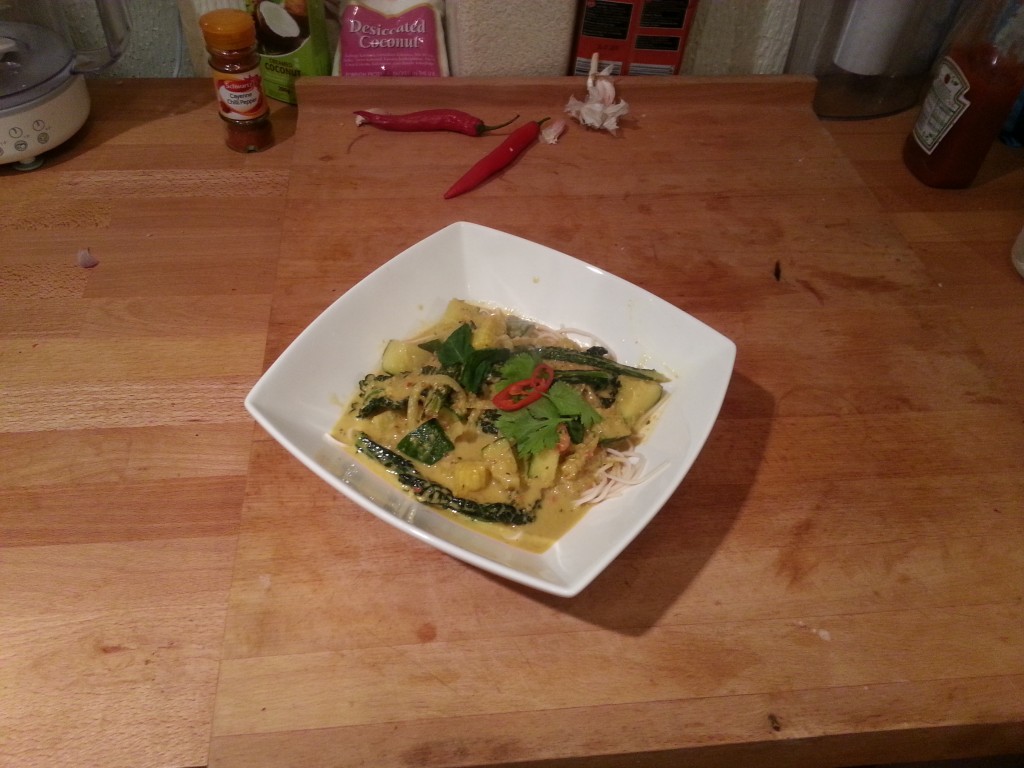 Stalks of a bunch of coriander

Mint and coriander to garnish

Making the paste is basically just roughly cutting most of the ingredients into manageable chunks and then whapping it all in the food processor (having ground the dried spices in a pestle and mortar first natch) and whooshing up until it forms a nice paste. These ingredients make enough for about three quite strong curries. The paste should keep for a week or so in the Fridge so i’d either give the rest away or freeze some.

Next start stir frying the vegetables, start with the sliced onion, then add the courgette chunks, then the baby corn and the kale. Fry for a few minutes until soft then set aside.

Heat up some groundnut oil in the pan (I use a non stick wok, which I highly recommend for this sort of thang) so it is quite hot but not OTT, then add three generous tablespoons of the Laksa paste turn the heat down a bit and fry for a couple of minutes. It should start becoming really, really aromatic.

Add the tin of coconut milk (It really has to be full fat i’m afraid but TBH everything else is pretty healthy) and the stock and cook over a reasonably high heat allowing it to reduce a bit. Add the stir fried vegetables and sliced chillies (I’ll leave the amount to you, it should be pretty hot. I use at least a couple of common or garden red finger chillies with seeds in. Save a couple of slices to garnish) and cook for a further few minutes to ensure everything is piping hot. At this point cook your noodles.
Put a bed of noodles in each bowl and ladle the veg and sauce over the top. Garnish with a little bit of mint, coriander leaf and sliced chilli.

This really is a piece of piss to do if you have food processor, and tastes extremely nice. I can’t recommend it highly enough. And of course if you wanted it to be vegetarian if you just use veg stock, and don’t put the shrimp paste in the Laksa base (put some dark soy instead) then it would probably taste alright.