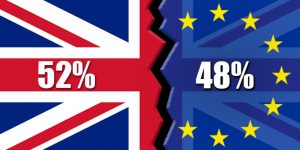 So I had an interesting discussion with some good comrades on the old Facebook about Brexit and what it means for the Labour party; and some interesting arguments were put my way and got me thinking about the issue. And so I decided seeing as I have my blogging muse in operation at the moment I’d jot something down.

I’d long thought that Europe was one of those issues that mattered loads to very political people, particularly Tories, but was of much less importance day to day to ordinary voters. The referendum last year rather shook my confidence in this.

However I think one of the striking things in this election is how little it seemed to actually be about Brexit. The Tories clearly wanted this to be the “Brexit” election. And, after the chance (or so they thought) to bury Labour; dealing with Brexit was the principal reason for the election. But as it happens to large parts of the electorate, and particularly for the Labour vote it really wasn’t the most important issue.

M’learned colleague Rob pointed me in the direction of Lord Ashcroft’s big detailed post election poll about voting reasons. Apparently Brexit was only the most important issue for 8% of Labour voters.

So I think it is fair to say a couple of things. Europe/Brexit isn’t as important to Labour voters as it is to some activists (like yours truly), and also that Labour’s policy on the issue had been very effective at closing off the issue, at this election at least.

It was a very clever, and skillfully done tactic to be honest. We adopted the Boris doctrine. Have your cake and eat it. And given the Tories were also lying through their teeth to the electorate about what is possible they weren’t really in a position to flush this out.

So our position was that we have ruled out no deal, promised to avoid a Tory “Hard Brexit”, maintain Tariff Free access to the Single Market, and end the free movement of people. And committed to respecting the result and the UK leaving the EU. It was a deliberate fudge that allowed us to look in multiple directions at once. People were able to read really what they wanted to read in that.

And it worked, a potential very difficult square for us to circle, getting a policy that won’t alienate the majority of Labour Voters and Activists who backed remain, particularly in cities, and at the same time isn’t harming us in the North and Midlands in places that voted leave.

Trouble is, it probably isn’t actually deliverable. The EU27 have made it crystal clear, time after time, that the only way to have tariff free access to the single market is to accept the four freedoms. And there seems no indication whatsoever that they are likely move on this. And the current omnishambles that is the state of the UK Government means we are really not well placed to be getting massive concessions out of the EU27.

Now my comrades with whom I was debating are adamant that this is not likely to be a big issue; that Brexit is causing the Tories problems and that we shouldn’t interrupt the enemy when they are making a mistake. That domestic issues are much more important to our new electorate.

All of which are fine positions; but personally I don’t buy it. I think that our position on Brexit is fine as a short term tactic, particularly with us not in Government and at the time of writing the manifesto unlikely to be so. But in the medium term it can and will cause us real problems.

For all that we should be delighted at the result last week let’s not forget that whilst we had a really good night we didn’t actually win the election. The Tories still got the most votes, and the most seats. And they are still the Government.

We need to build on our coalition from last Thursday and things that threaten that will threaten our chances of Seeing Corbyn walk into Number 10 as the new PM next time out.

So I don’t buy that it isn’t important because it has the potential to crack our coalition.

If the Labour Party is faced with a position where the Tories put “No Deal” to the commons as the only option where do we go? How do we please the Labour voters who are remainers and those who want to leave the EU?.

More likely though is what do we do if May is putting a really bad deal to us that does get rid of free movement but doesn’t achieve any of our aims (A Bankers Brexit say?)

Or what happens if we are given two options join the EEA and accept free movement or crash out on WTO terms?

In any of those scenarios the Labour party is going to significantly piss off a big part of it’s support base on an issue that might not be number 1 to many but is very important to some. Even if only 8% consider Brexit to be the main issue that is still 8% that we can’t really afford to lose if we want to form the next Government. And there are no doubt other consider this an important issue if not a key one.

According to the same survey Rob pointed me at 43% of Labour voters would still like to stop Brexit if possible. That certainly chimes with my anecdotal evidence, and I’d bet that figure is actually higher amongst activists and party members.

Another thing that has been rammed home to me in glorious technicolour is how out of sync I am with what “young people” think. My delusions that I am “Down with the kids” have been totally shattered by the creeping realisation that I am actually now pretty much just a middle aged Granddad.  Having said that though everything I have seen about the referendum last year, and anecdotally in this election, suggests to me that for our younger activists fighting Brexit is a more important issue than it is for the wider Labour electorate. I’d love to see some proper research into what this looks like.

Now I’m very passionate on this issue, and I therefore am quite probably giving this far more weight than others do. You know since I was old enough to vote I have put my cross by the Labour candidate every single time I had the opportunity. Even during times (like after Iraq) where it was very, very difficult for me to do so. If Labour’s policy was, when push came to shove, to go for a Hard Brexit in order to stop free movement. If that is actually the official policy of the Labour front bench and what they planned to do in office then that streak would be broken. I doubt I’d vote for someone else but there is no way I could vote for a party in favour of a hard Brexit. I’m almost certainly a minority in this; but I don’t think I’m in a tiny minority.

So because our official policy is probably not on the menu, then at some point we are going to need to grapple with what we chose to do when we have to jump, and which portion of our base/support to we want to annoy and alienate.

For what it is worth my 2 cents are that when push comes to shove the Labour Party will end up prioritising the single market and as soft a Brexit as possible over ending free movement; though given my recent record of predictions not sure why anyone would ever listen to me on this sort of thing ever again!

Now we have just seen an election in which the electorate have shown that Brexit wasn’t as important an election issue as many expected it to be. And I totally acknowledge that.

However voters having different priorities in deciding how to vote doesn’t make any difference to how significant a thing the actuality of Brexit really happening will make to public policy. Let’s be clear Brexit, whatever form it takes, will be the biggest and most comprehensive change to our legal, economic and political systems since the second world war. It is hugely complex and will affect pretty much everything in British public life.

If Brexit is botched, and causing significant adverse consequences for the economy and public finances (and even its most delusional dewey eyed advocates acknowledge that is likely in the short term), even if Labour manager to get through that process without any mud sticking to us, then that is still a problem for any incoming Labour Government.

So I think our tactics on Brexit in the short term has been right. But for the party we need a strategy for how we continue to square the circle when we can’t fudge it any more. And more than that we need to know what we are actually going to do when the party has to make a big choice about it’s role in whatever kind of Brexit happens.

And it is clear that isn’t settled at the top of the party. Two of Corbyn’s “Big Beasts” in John McDonnell and Barry Gardiner have struck quite different lines on this since the election. That needs to be bottomed out soon. Facing both ways can work for a bit but sooner or later you get found out, because the choices served up won’t allow us to satisfy our manifesto promises.

Brexit has the ability to break the Conservative party. But I believe we have to recognise that it is comparably risky and toxic for us too.