At some point in the next few weeks we are going to have a new Prime Minister,  who will be elected by approximately 0.2% of the British public (Yay we got our democracy back…. Wait what?). 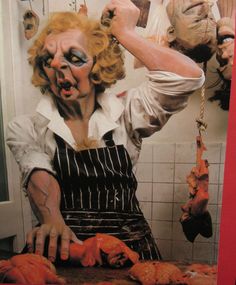 The shape of things to come?

Whether it is May, or Leadsom (and for some reason I have a suspicion it might be the latter) they are going to be in a right old pickle about what to do about #Brexit.

Right from the start I think that nobody in the Leave team particularly expected to win. Especially not those like Boris, and Leadsom, whom it appears were not true believers in the cause but who had taken it on for political advantage. Clearly no planning had been made for the strategy of what to do in the event of a leave vote, not just by the Government and EU countries but also by the actual people pressing for a leave vote.

It is my view that those who were angling for leave had blithely expected that in the event of a leave vote then the rest of the EU were going to treat us well. That it would come to a simple determination of pounds, shillings and pence, it would be in the economic interests of the rEU to ensure shared free trade access so they’d be bound to come to the table.

I heard this view articulated many times during the referendum campaign and I thought that it was a catastrophic error of judgement. My view, which I think is being borne out by subsequent events, is that in the event of a UK vote for Brexit the rEU would have no choice whatsoever to treat us harshly.

I was sure that whatever impact a potential full Brexit onto WTO rules might have on the rEU economies (worth about 3% I understand), the potential cost of encouraging further countries to consider exit would be many times greater. That as with Greece and the bail out, the EU would need to make sure that the Brexit medicine was one that no other patient would want to take. *

And on top of that whilst there would clearly be costs to rEU economies to take this line, there would also be advantages…. I have no doubt that the French agricultural lobby would quite like constraints being put on British agricultural exports to the EU, and that the motor industries would quite like the pressure on the likes of Nissan to relocate their production facilities to mainland Europe.

But the idea that any country could leave the EU, and receive more advantageous terms for access to the single market than EU members would certainly mean the end of the EU. It represents an existential threat to the future of the EU and there is surely no way that Germany and France could countenance this, particularly with in France a “Frexit” being mooted by the far right or a Neexit in the Netherlands.

So it was no surprise to me when the rEU made it crystal clear that there was no room for negotiation on the freedom of movement for any country wishing to have access to the single market . I have no doubt whatsoever this position will not budge, and that the end result will be that either the UK loses access to the single market, or we accept the free movement of people. I cannot see another option.

So this will put May/Leadsom in a terrible bind. They are either going to have to push the button on full withdrawal and WTO rules, that everyone agrees will cause terrible financial upheaval in at the least the short and medium term (though most accept the WTO rules would actually cause the UK to be permanently weaker, so in the long term too) or they will have to fundamentally betray the lions share of the leave voters who have, let’s be honest, voted explicitly to stop immigration as the touchstone issue for voting leave.

I really don’t know what is going to happen, and I am especially worried about how the Tory leadership election will still further tie the next PMs hands.

Leadsom’s path to victory will surely be predicated on an appeal to Tory leave voters that May, and the Tory establishment, having backed remain cannot be trusted to put the referendum result into action. That they will look to squirm out a compromise of some description. That only Leadsom, as a Brexit supporter, can be trusted to actually do what needs to be done.

May will then have to counter this, particularly if it seems momentum is starting to swing toward Leadsom. I’ve no doubt that as the front runner she will want to give herself as much room as possible to manoeuvre but she might find herself needed to give categorical assurances about specific action in order to win the contest. As we saw with the GOP selection in America a candidate that no-one expects to win saying “out there” stuff that resonates with a core base can get momentum and cause centrist establishment candidates no end of heart ache.

It is never a good idea to go into any sort of negotiation with your hands tied, but if one thing has become abundantly clear over the last couple of weeks is that those in positions of power in the UK now are always putting short term tactical advantage over the long term good.  And I fear the new PM, even if their instinct is to be rational and reasonable, will be in a position where the only thing they can offer the rEU is a deal the rEU will just reject out of hand.

Now normally I’d have said that when push comes to shove if a tory government has to make a choice between doing something for the electorate, or doing something that is in the interests of the economy generally, and the city in particular, they would always jump one way. In the past, whatever else I’d say about the Tories, I always thought that they would be loath to do something that seriously damaged the economy, or at least the financial economy anyway….

But now? The truth is that many of the Tories are quite mad when it comes to Europe, I’m not sure there is a great deal of rationality anywhere. The swivel eyed head bangers are the norm now. So where does the new PM go? If they go WTO rules they will almost certainly be deliberately torpedoing the economy at least in the short and medium term. Additionally this is an option that would almost certainly cause Scotland to cede from the Union meaning the PM who did this will have broken up the UK. A combination that will surely destroy their credibility and legacy as well as ending their tenure as PM.

Or they fundamentally betray their main body of support, doing a deal that does not give their supporters what they expect and potentially leading to the party haemorrhaging support to UKIP for a decade or more.

This will represent a terrible frying pan/fire situation, and who knows what they will do about it.

The smart move now, if the candidates didn’t have to win a leadership election would be to play things cool in the run up to the French and German elections to give some time for the sting to be taken out of things and a bit more calm and realistic negotiations to take place. To put off doing Article 50 (some think this might end up being for ever) until a broad deal can be outlined with the rEU. This would then give them the chance to have a second referendum on the terms of the deal, or even a General Election (which as I argue here isn’t looking good for Labour ATM) fought on the basis of said deal.

But I’m not sure that smart move will be an option.