“The rabbit-hole went straight on like a tunnel for some way, and then dipped suddenly down, so suddenly that Alice had not a moment to think about stopping herself before she found herself falling down a very deep well.” 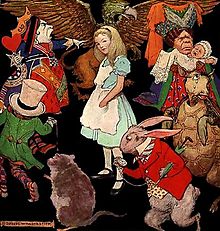 Down the rabbit hole.

Fair to say I have been feeling quite a lot like Alice over the last couple of days. What was a morose, drunken moan about being unlucky in love turned into a funny bet with some friends. Which turned into a little campaign in a corner of twitter, then went crazily stratospheric. Time bloody magazine, the Daily Mail, being the page 3 pin up in my local rag the Plymouth Evening Herald. What on earth has happened?

My pals had been very well meaning, I think they hoped that my normal and natural confidence and gregariousness would, with a bit of prompting, spill over into me being able to get a bit of confidence in the dating world.

Of course the slight flaw in this plan is that if someone’s problem is that they are nervous, impossibly shy and totally lacking in confidence , then them needing to ask out girls in front of thousands of people on twitter and in a media spotlight…. Well you can imagine.

In truth I have been utterly overwhelmed. Had the ability to go on twitter and act like a “PLAYAH!!” and what I have actually done is build a fort at home and hide from twitter in nervousness and embarrassment. Oh how disappointed Donna must be.

Here before me is the kinda opportunity every shy boy surely dreams of, a veritable smorgasbord of interesting available ladies actually contacting me saying they would be up for a date. Blimey…. I could be like Lou Bega in Mambo Number 5!

Here is the trouble, If I was a “Notches on the bedpost” kind of a cat, If I had doing the Lou Bega in me then I don’t really think #GetRalphADate would have been necessary. I’m just not that bloke.

Of course this hasn’t been a total disaster, I managed to, for the first time since the Palaeolithic era, work up the courage to ask someone out. Bizarrely, despite my expectations, the world didn’t end, I didn’t die of embarrassment, and…. Cripes…. She said yes.

However there is this crazy media circus thing happening, I’m getting millions of messages on twitter and all these cool sounding available ladies are saying they wouldn’t mind me asking them out. Loads of them seem cool, interesting, and exactly the kind of people I’d love to date but would never have the confidence to ask out….

Trouble is, and I realise this sounds impossibly old fashioned, and ludicrously twee, I don’t really want to arrange other dates because I am hoping this works out….

I’m sure for those accustomed to modern internet dating it is probably normal to be pursuing different lines of enquiry on the quite reasonable grounds that you really don’t have any idea if things will work out with complete strangers. But it makes me feel intensely uncomfortable.

Now I’m a sensible chap. I understand that the odds of arranging one date and it working out “happily ever after” are ridiculously low. The cynical generation Xer in me, that likes early 90s grunge and says “everything is rubbish”, yells at me not to be so stuck in the mud and old fashioned.

So that’s the reason I haven’t come back to anyone, I hope I’m not being incredibly rude. I kinda feel like by being so scared of twitter I am being an awful cad, but it isn’t that way at all.

I realise that in posting this it probably means that if the date doesn’t work out I have totally blown #GetRalphADate and that any subsequent approach to anyone on twitter would basically be tantamount to me saying “Hey Baby, wanna be my silver medal?” which I can’t imagine is an approach that anyone would like.

I didn’t expect this twitter thing would work at all, so I have been ridiculously unprepared for what I would do in the event that anyone was interested. I guess the character flaws I have that have left me lonely and single are the same ones that have meant I have been unable to take advantage of #GetRalphADate

So, erm, sorry if I have disappointed anyone. I have not really been able to do this properly because I have been too embarrassed and scared. Who knows if things don’t work out maybe I’ll actually have the courage to ask someone else out on twitter? Maybe I’ll sign up to “Plenty of Fish” or Tindr?

That optimist though, he hopes not, he hopes it won’t be necessary.