I find it really strange when thinking about Audley Harrison, he really is a man of contradictions. For all that he is seen by many as a clownish figure of derision he captures the imagination and attention of the British Public for boxing in a way very few can.

And when I do think about him I am in future going to try and think about him in much the same was as I do about the Star Wars prequels and the Matrix sequels. Namely I shall pretend his career as a pro boxer did not exist in order to not tarnish a fond memory of an early thing that was markedly superior to what came later.

Because remember Sydney, Harrison instantly became a sporting hero for a reason. He won heavyweight gold for Britain at the Olympics. He was an exciting, charming and endearing fellow who pretty much everyone I knew warmed to him at the time. However difficult I hope that in time fight fans can find a way to acknowledge this.

But let’s be clear everything that came afterward was a joke and a slap in the face to those who supported him after the Olympics. As far as I can see Audley produced only one real moment of distinction in his pro career when he beat Danny Williams in spectacular fashion. Everything else was a let down.

So for me the fact that he lost, and lost badly to David Haye really isn’t too much of a surprise. But even for Audley the manner of his performance was shocking. To only land one punch in the entire fight was a disgrace. Even by his low standards he let himself down. I reckon he will regret it for the rest of his life. 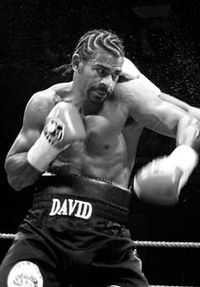 For Haye it is a case of job done, that is all. The absolute minimum requirement for him in the fight was to spectacularly and explosively get a knock out and end Audley’s career. Job done, but there is little kudos for Haye in doing exactly what was expected. Time for him to bank his bumper payday and get down to the business of fighting the Klitschkos.

Clearly there are some business reasons for why this fight might not happen, issues around money seem to have scuppered the bout so far. Kevin Mitchell in the Guardian argues that Haye must accept a 50/50 split of world wide revenue. Previously the issue of UK pay per view revenue has been a sticking point. I agree what needs to happen is a straight down the middle fight in terms of money. In terms of venue obviously I would like it to happen in the UK preferably, or at least in Europe in terms of being able to watch the fight at a reasonable hour. I do think perhaps holding the fight at a neutral venue in the states, Madison Square Garden (as Vitali has suggested) might well be a sensible compromise.

I also think, contrary to the popular received wisdom, that Vitali is probably the better fight for Haye. Sure he is more durable, and has a much better chin. But he is slower, and for my money at least it is noticeable how much less mobile in the ring he has been over the last couple of fights. Haye will be very mobile and he hits hard and fast (just ask Audley), and to be fair the charge that the Klitschkos “don’t like it up ‘em” is not unwarranted. I think Haye has every chance of getting a convincing points victory if he can avoid getting knocked out. Gun to the head, I would probably pick Vitali but I think it is close to a 50/50 fight.

The funny thing is that the same night that Harrison dished up a performance that was a disgrace to boxing, a few hours later in Dallas Manny Pacquiao and Antonio Margarito were engaged in an astonishing, wonderful thrilling 12 rounder that displayed everything that was great about boxing.

The fight was fast, furious, powerful, brutal but with a huge amount of skill. Margarito looked massive compared to Manny (just like Clotty did back along), and whilst he was moving up to Light Middleweight Margarito is a natural and quite big welterweight. Pacquiao remember won his first title at FLYWEIGHHT. It reminded me of on one of the early “Fight Night” video games on the original Playstation pitting Naseem Hamed against Lennox Lewis.

If you knew nothing about the boxers and just saw them as they lined up before the fight started you would have been expecting a brutal mismatch. And you would in once sense have been right it was, but not the way you might expect given their respective size and frames. Manny dominated and battered Margarito and put on a masterclass of boxing. Not to say Margarito did not put in a good showing. A few times in the middle rounds he managed to pin Manny against the ropes and I did wonder what might happen. But in the end it was a comprehensive, dominant, special victory for Pacquiao who becomes a genuine six weight world champion.

I think it is virtually impossible to talk about Pacquiao and not talk also about Floyd Mayweather Jnr. Last time I talked about boxing on this blog, in the wake of Pacquiao’s emphatic victory I stated that I felt Manny would win the fight. Since then Mayweather put on an emphatic masterclass of his own against Shane Mosely. 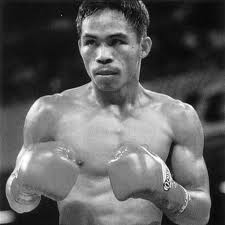 Now it is an interesting situation visa vie legacies and the like. For me Pacquiao is in a strong position. Given what he has done, and frankly the fact that he has already lost in his career I don’t think he has got a lot to lose whatever happen. If FMJ keeps ducking him and the fight never happens I think Pacquiao is already secured in the hall of fame/all time great list. Similarly taking the fight with Mayweather and losing probably won’t effect his status.

For FMJ the equation is a little different I think. I cant help think if he either loses the fight, or is seen to be ducking it (and lets be clear all the drugs testing nonsense and so on is Floyd ducking the fight), then his reputation is tarnished. Particularly if he ducks it.

Further it would be a disgrace to the sport of boxing, greater by many orders of magnitude than any low Audley Harrison could ever achieve, if this fight did take place. It is a fight that would capture the imagination of the whole world, and huge numbers of casual or non fight fans. I am occasionally prone to bouts of over excitement, hyperbole and exaggeration, however I think that a Pacquiao vs Mayweather fight will be the biggest boxing match since The Rumble in the Jungle in 1974.

So who will win then? I have to say I do find it hard to pick; Mayweather is a genius wonderful defence and awesome boxing technique. Even if you are not always entertained and thrilled when watching Mayweather (he isn’t exactly a LaMotta-esque all action brawler!) then you always know why they refer to boxing as “The Sweet Science”.

But I keep thinking back to the Mayweather/De La Hoya bout. In the early rounds De La Hoya had Mayweather in trouble, dominated him, and had Oscar been able to keep up that pace I have no doubt he would have won. For my money Manny is better now than De La Hoya was in 2007 (or frankly at any point during his career), he is quicker, has better accuracy, seems to have awesome power even at Light Middleweight (just look at Margarito’s face after the bout). But most of all he isn’t going to run out of gas half way through.

I just cannot envisage anyone beating Pacquiao on points at the moment, he comes forward in a style judges will always love, throws tonnes of leather and does so hard and accurately. Even if Mayweather is landing the better shots I can’t help thinking Pacquiao will nick the rounds. So for my money FMJ will have to stop Pacquiao… He is certainly there to hit, defence being by a country mile the weakest part of his arsenal. Margarito certainly found the target pretty frequently. If anyone in world boxing can stop Pacquiao then it is Mayweather.

But now, like in March I pick Manny Pacquiao to win. This time I don’t need a gun to my head as I am reasonably confident. He is too quick, too powerful and too accurate. Not sure FMJ will ever have been put under anything like the pressure he will be. So Manny on points.

What a contrast between Pacquiao and Harrison, both with natural gifts one is a shining light to the sport, and one a disgrace. Shame really….

Lastly this blog was prompted by my mate Mark Tinson who is celebrating his 30th Birthday this weekend (even though his birthday was actually some time ago) so I’d like to shout out a Happy Birthday (Also to John and Jamie for whom it is a joint 30th do)!