Firstly congratulations on your Election as the leader of the Labour party. I supported you from the start and you got my First preference vote. I even made a small donation to your campaign so I am delighted that you have won.

As a small time political blogger from the Westcountry it is hugely presumptuous of me to give you any advice. However self important presumptuousness is something of the hall mark of political blogging so here I go, a few bits of advice:-

1. Remember that you said this in your acceptance speech.

“I do believe this Country is too unequal, and that the gap between rich and poor doesn’t just harm the poor, it harms us all and it is something government must tackle.”

I think the biggest sense in which new Labour failed was the degree it lost sight of what the mission was, of what we are for, and why we exist politically. With this sentiment you have for me articulated exactly what ought to be the central defining point, the “raison d’etre” for the Labour party in the 21st century.

Whatever else happens don’t forget this, and make sure it informs everything you do as party leader. 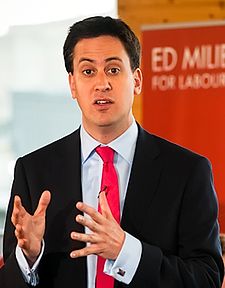 The next Prime Minister?

2. Confound expectations and be prepared to infuriate us on the left.

Uncomfortable as it is for me to admit I recognise that in the real world if I am agreeing with everything the Leader of the Labour party says, then said leader is heading for an electoral defeat. The reality is the the left are out of step with mass popular opinion.

It doesn’t really matter if this is because of false consciousness, propaganda from the right wing media, or just because the left is out of touch. The reality is public opinion is what it is and you need to ensure you win the next election. When Tony Blair said that it wasn’t a choice between “The Labour Government of our Dreams, or a pragmatic Labour Government” but instead a choice between “New Labour or the Tories” he was partially right.

But…. the failure was to believe that his vision was the only possible electable Labour Government, that what he came to believe “new Labour” was became an unchallengeable orthodoxy. In fact if it was anything then New Labour was pragmatic and flexible at the start. It is, and will be, possible to win elections but to be better than what Mandleson and Blair came to believe was the only path. I believe you can do that, and if you keep in mind my point one you will.

Iraq aside, I think there was little that upset and alienated our supporter and activists more than the awful Authoritarian tendencies of New Labour, particularly toward the end. We were wrong about detention without trial, trial by jury, ID cards, political protest etc. If you are serious about wooing disaffected Lib Dem voters and activists then you will need to tackle this.

It does not matter what we say the Daily Mail/Express anti crime authoritarian right is never going to back and support Labour, so why alienate our support craving acceptance we are never going to get?

4. Give Ed Balls the health brief.

Despite my Trade Union (the CWU’s) enthusiastic embrace Ed Balls started the campaign as my 5th Preference, by the end he was my 2nd. Both a great campaign and a brilliant job of tearing into Gove has led to me having a huge amount of respect for him now.

I think that he is going to be our “star player” in attacking the coalition. And for that reason I think he needs to be where he can cause the most damage. This has to be health. The public are instinctively mistrustful of the Tories on health. People remember the 80s, and they are weak and vulnerable here.

In opposition we can score points in a massive and meaningful way here, based on his mauling of Gove Ed Balls is the bloke to do this.

5. Please remember that being “pro business” does not mean “pro big business only”.

Lots of ordinary working class people run small and medium business’s. The Labour leadership is inevitably going to present itself as being business friendly, it has to to win. But all to often under Labour this seemed to manifest itself as being on the side of the super rich, super powerful companies that frankly whale on the little guy.

There is nothing wrong with standing up to monopolistic business practices, and those who try and strong arm communities. Labour cannot afford to always be on the side of the supermarket over the local independent retailers. Small business people ought to be natural Labour supporters and the party ought to get them onside.

6. Don’t renege on your pledge to campaign for a “Yes” in the AV referendum.

If we really want to have a better kind of politics, then we need to change the rules of the game. I believe AV is far from perfect but it is infinitely better than the status quo. There will probably not be another opportunity to change our voting system for a generation and it will only happen if the Labour Party leadership gets behind it fully.

For my money little would signal nothing had changed if than if Labour did an about turn on this issue for tribal, partisan political purposes.

7. Focus on the Tories, and not the Liberal Democrats

I blogged Recently on why I thought the left were missing a trick by seemingly focussing all of our fire on the Liberal Democrats. The Tories are the enemy, they are the ideological drivers for savage cuts, and regressive ones that hurt the poor most.

8. Win the next election.

There is no glory is in principled, but long term opposition. There is little comfort to the millions of poor and disadvantaged people who are going to be royally screwed by the ConDems, in hearing opposition Labour politicians issuing welcome but hollow platitudes. If we want to tackle inequality, make the country fairer, put in place a positive vision of a good society then we have to win and be in government.

Do what needs to be done, and win the election!